What are solenoid valves? 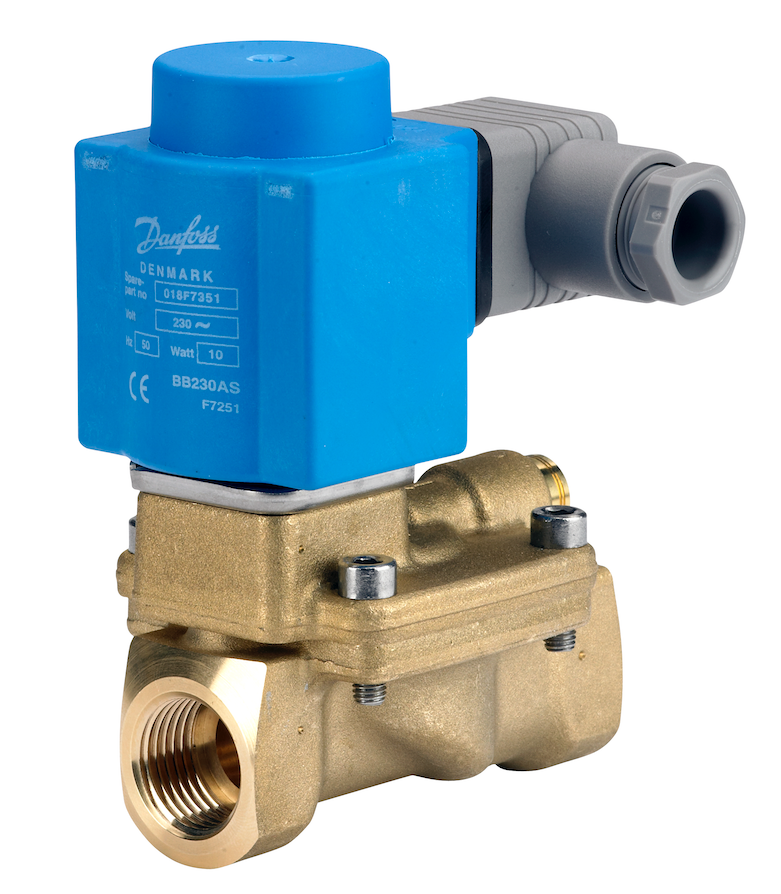 Solenoid valves come in the common two-way, or even more complex three-way and multi-way constructions used for flow switching and mixing. Most often, valve bodies are made of brass, stainless steel, aluminum or even plastic. Before purchasing always check that the material is suitable for the intended use and is compatible with the medium.

The valve consists of a valve body and a coil mounted on it. The inlet and outlet are fitted with connections so that it can be connected to the pipeline. Inside the valve body we can find a ring, spring, plunger and seal or diaphragm. 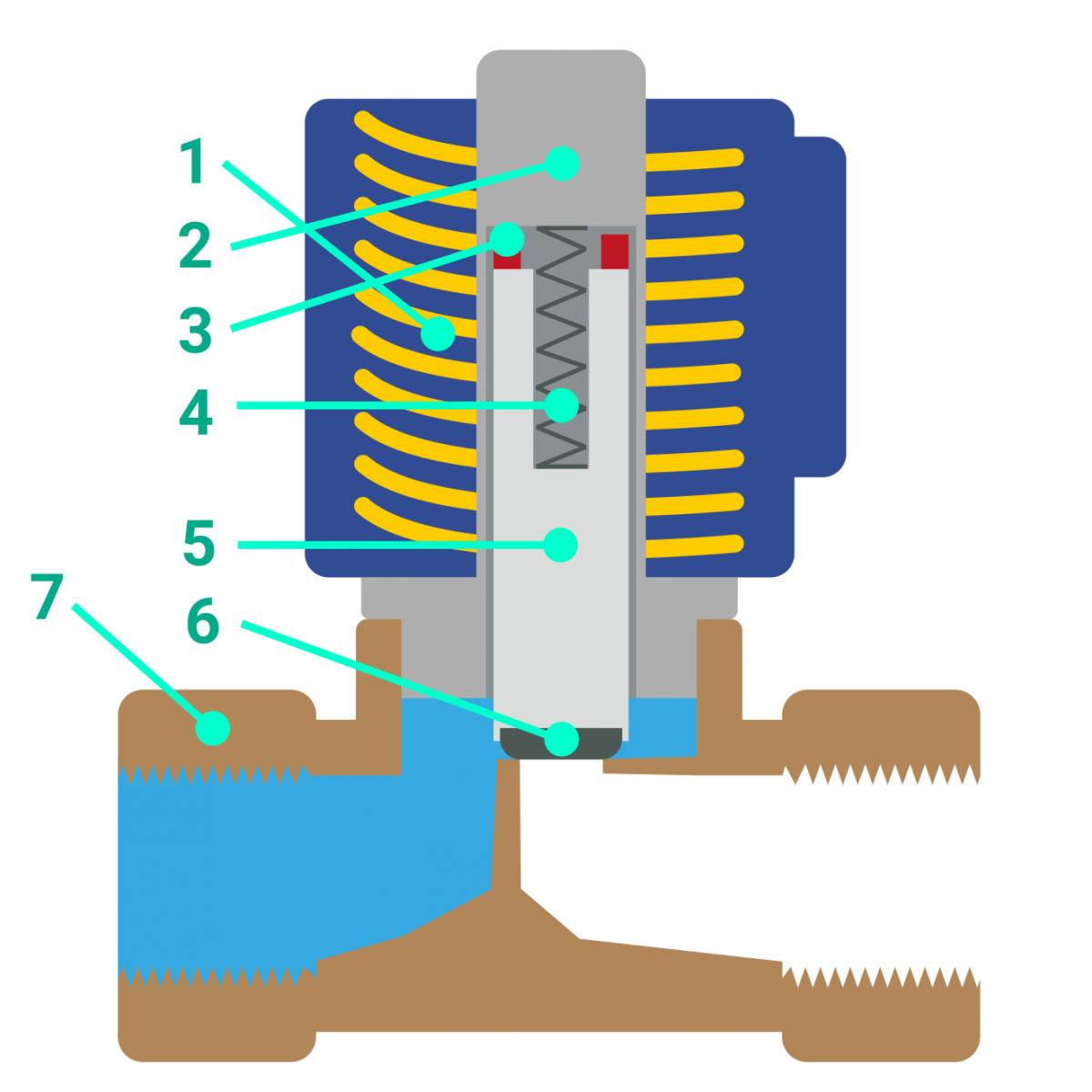 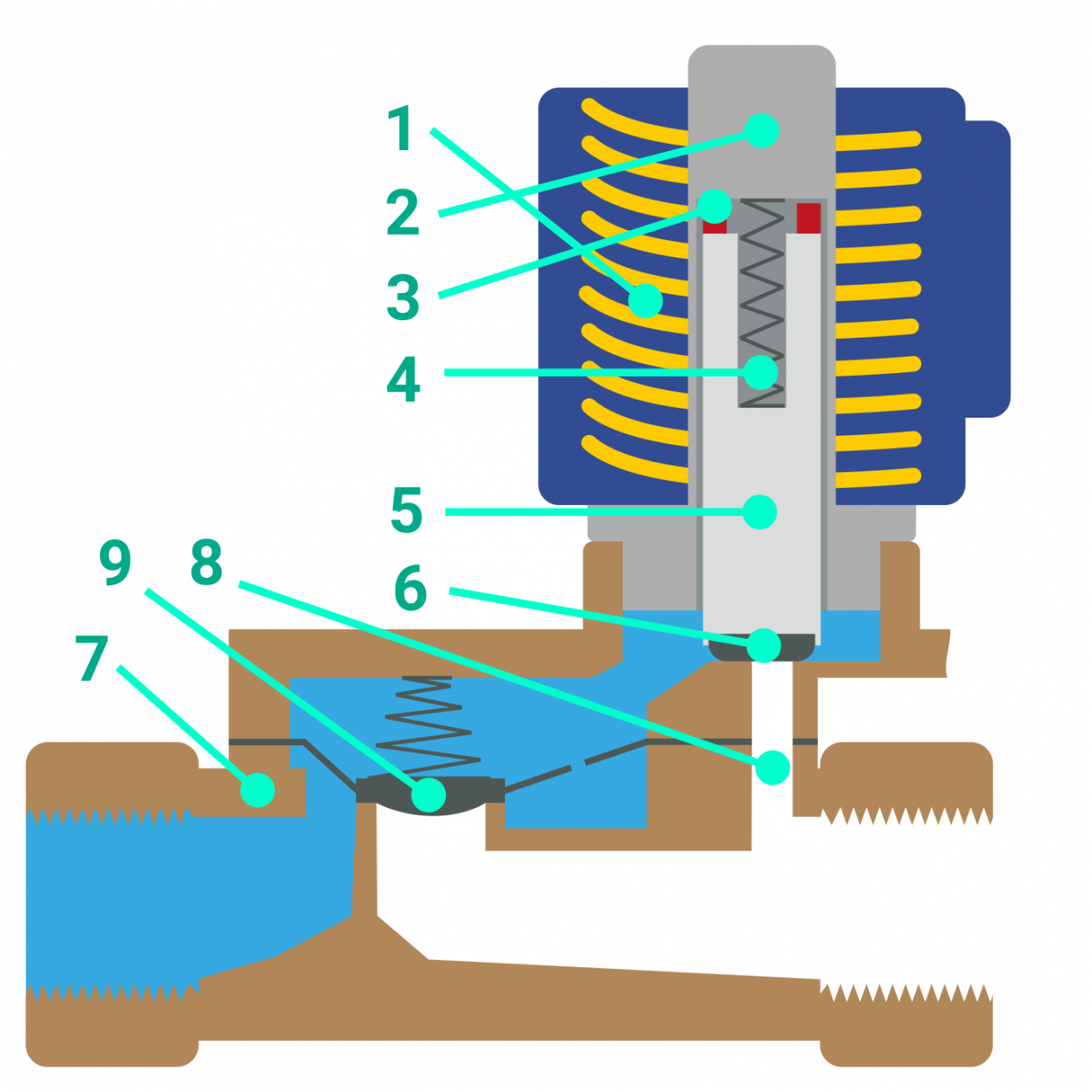 The two main categories of solenoids are NO and NC - normally open and normally closed. When an electric current is applied to the coil, a magnetic field is generated, the strength of which depends on the current, the number of windings of the wire and the material of the moving core, also referred to as a piston. The magnetic field moves this plunger and thus closes or opens the valve. Without power, the valve can be either closed or open. 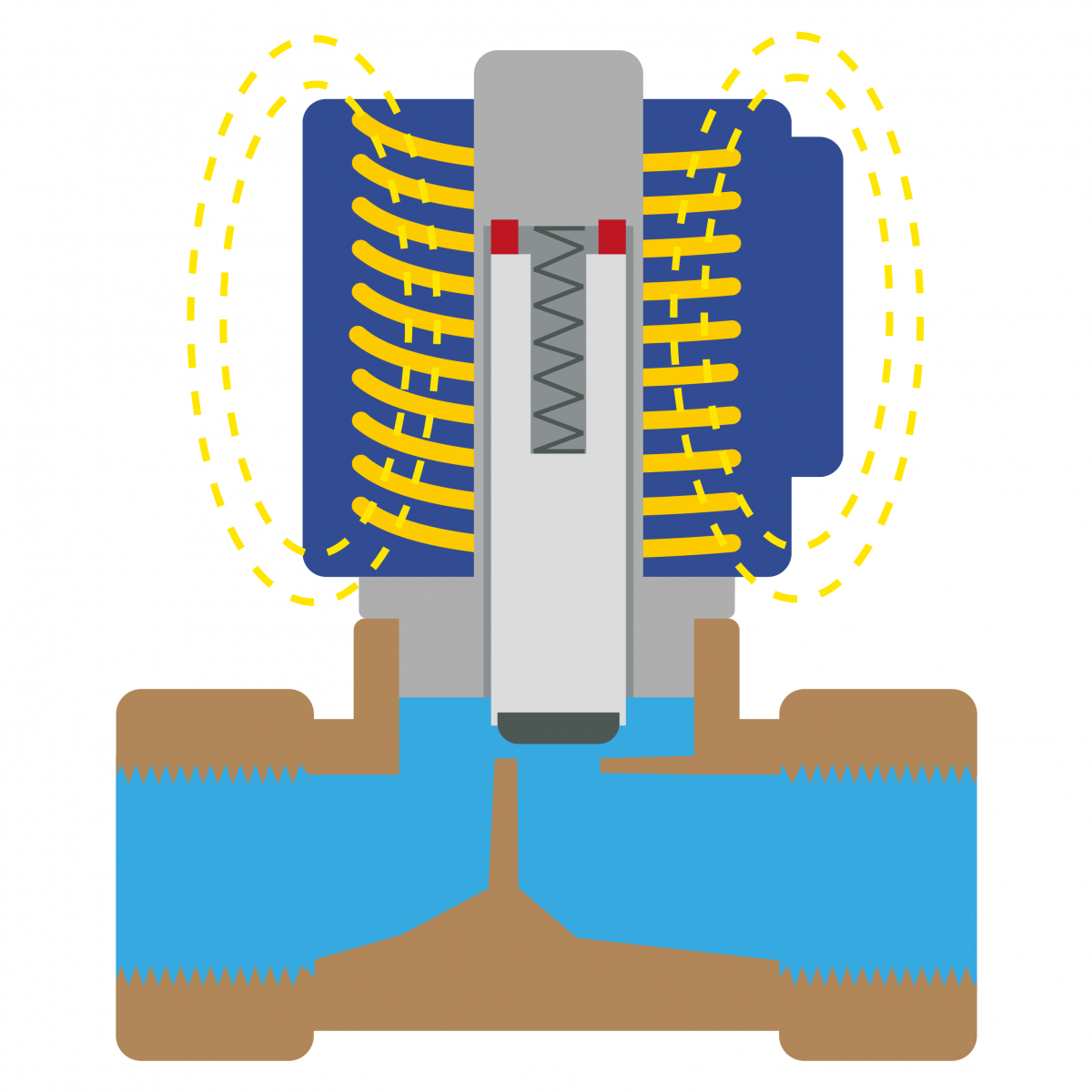 A normally open valve allows the medium to flow without power. The plunger is pulled always out and the medium can flow through the valve. However, when powered, magnetic field pushes the plunger down and closes the valve. This variant is mainly used in applications where it is more energy efficient to have the valve open for a longer time.

Solenoid valves also differ in the way they are operated. Either they can be operated directly, where the coil directly opens an orifice, or they are operated indirectly, i.e., they are controlled by pressure difference between inlet and outlet. An arrow on their body must point in the direction of flow in piping systems.

Directly operated valves work on a very simple principle. For this example, we will have a normally closed valve. Once the solenoid is deenergized, its spring pushes on the plunger, which then closes the orifice of the valve and rests on the seal. Once power is turned on, the coil pulls the plunger up and opens the solenoid. With a normally open valve, it is exactly the opposite.

These solenoids are used more for small flows where there isn't a high pressure. They do not require any pressure or pressure difference for operation, so they can be used even at zero line pressure.

Indirectly operated valves, sometimes also called pilot-operated, operate on the principle of differential pressure between inlet and outlet. In this case, the valve orifice is closed by a diaphragm which separates the inlet and outlet openings. There is a hole in the diaphragm through which the medium can flow into the chamber above from the inlet. This balances pressure acting on the diaphragm and it remains closed. Again, let's take a normally closed valve as an example. When the valve is not energized, the diaphragm is pushed down by the spring and pressure increasing in the chamber above the diaphragm. The diaphragm thus closes the valve and media can't flow. The chamber above the diaphragm is connected to outlet opening by a small channel (pilot orifice) which is closed by a piston. When the coil is energized, it lifts the piston up, allowing media to flow through the pilot orifice into outlet. Because it is larger than the smaller orifice, pressure above the diaphragm is decreased, while pressure in the inlet orifice remains the same and now even higher. It thus lifts the diaphragm and allows media to flow into the outlet. Differential pressure ranges from 0.3 bar to 1 bar. With a normally open valve, the operating principle is exactly the opposite.

These valves are suitable for larger flow rates.

Three-way valves have a total of three ports for connections. They can switch between two circuits or mix two circuits together. Some valves handle both of these functions, whichever is needed at a given time. The solenoid is always connected to only two ports at a time, through which media flows at a given moment.

In this case, the valve has two inlets and one outlet. The coil determines which output is used at a given moment. Media flows from the upper input to the output without power. On the other hand when energized, the coil pulls the piston up, stopping flow from the upper inlet and allowing access from the lower inlet.

This valve works in both directions. Either as distribution or mixing. However, only two ports can be in operation simultaneously.

Coils are powered by either direct current or alternating current. DC coils have more windings than AC coils. They are less prone to collect dirt and the lifting force in the initial and raised position remains the same. However, the energy consumed and the magnetic force of the DC coils are temperature dependent. AC coils have less dependence, but are more prone to contaminants that can cause the coil to buzz. They are characterized by a faster switching speed. If the piston is blocked, the coil may overheat. At the same voltage, the resistance of the AC coil is less than that of the DC coil.

The range of voltage of coils is wide. For direct current, it is between 12-48 V, for alternating current, it ranges between 110-230 V. Solenoid valves are usually sold with a coil, but it is also possible to find valves without one. Coils are fully replaceable and you can find a replacement coil for each valve if the existing one stops working. Replacement is quick and easy.

What are the differences of sealing materials?

The material of a seal and diaphragm should always be compatible with the media. A different type of seal is always more suitable for different media.

NBR - or nitrile rubber is of synthetic origin. It is characterized by high wear resistance. It is an elastomer with high tensile strength. Deformation probability is very low. It is suitable for water and glycol based liquids, for oils and for gaseous media such as air. Temperature should range between -10 and +90/100°C.

EPDM - ethylene-propylene rubber. It is characterized by high resistance to aging, ozone, heat and UV rays. Deformation probability is very low here. Temperature range is wider than with NBR, from -30° to +140°C. EPDM is most commonly used for water and glycol based liquids and for steam applications.

ViTON - for applications with a temperature range of -15 to 220°C. It is a fluororubber material with resistance to a large number of chemicals, such as mineral oils, ozone, fuels, organic solvents and more. It is characterized by excellent insulation properties and resistance to vacuum. It is not very flexible and scrapes easily.

FKM - another fluororubber material with similar properties to ViTON. Temperature range is from 0 to 100°C. Used in applications with water and glycols, for oils and gaseous media such as air.

PTFE - a very durable polymer with a temperature range of -10 to +150°C. Used for steam applications. It is characterized by very high resistance to aging and chemicals, high tensile strength and low friction.