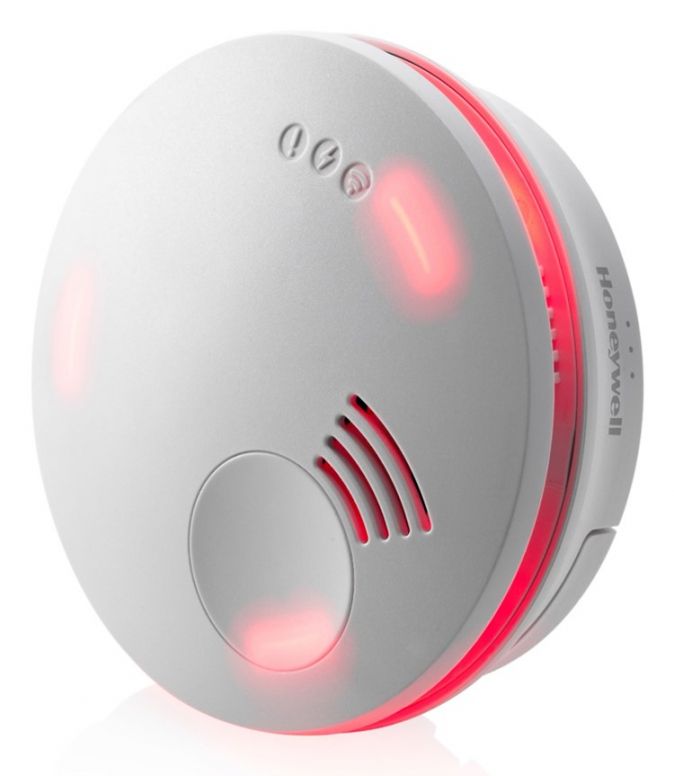 Smoke detectors are devices designed for early detection of smoke most often coming from incipient fire. They can be either separate fire detectors or connected systems. Depending on the functions, it may have an audible and / or visual signal which serves as a warning of the fire danger. Other detectors send the data to the connected control panels, which process and evaluate them. Detectors have been used for several decades to protect commercial and residential buildings, other buildings, property and, last but not least, the people themselves. Thanks to early warning of potential dangers, they provide the means to extinguish the fire even in its inception or get away from the building. More than one person is indebted to smoke detectors for their lives. Connected to fire systems can quickly call for professional help.

Households will welcome the possibilities of autonomous detectors with integrated signaling functions, otherwise referred to as fire detectors. Commercial buildings, hospitals, offices and other public buildings install central fire systems in their premises, which allow them to monitor the status of the entire building and data from dozens of detectors simultaneously from one control room.

The most common dimensions of detectors are of a diameter of 150 mm (d = 150 mm) and a height of 25 mm. The shape of the detectors is usually round, but it depends on the innovation of individual manufacturers.

Detectors work on the basis of two principles - physical or optical.  Physical ones are so-called ionization detectors, and optical then so-called photoelectric detectors or more often optical detectors.

Ionization detectors detect smoke using two chambers. One chamber is closed and serves as a reference. The second chamber is open to ambient air. In both, air ionization and subsequent evaluation of the measured electric current flow take place. Results are constantly compared between the two chambers to determine any deviations in the open chamber. Should smoke particles enter the open chamber, some ions will attach to the smoke and stop conducting electricity. The detector then detects the difference in electrical current and triggers an alarm. The ionization in both chambers takes place thanks to the radioactive element Americium-241, but it is such a small amount that it produces only a very low level of radiation outside the device. Ionization detectors do not pose a significant risk and are safe for the environment as long as there is no forcible entry into the ionization chamber of the alarm. The chamber itself acts as an ionization shield for radiation. The risk of exposure from an ionization detector operating in the classical way is much less than naturally occured radiation.

Optical detectors have a light source that passes through the air and detects any deviations in light intensity caused by smoke, dust or other airborne substances. It can be infrared, visible or ultraviolet light, the source can be a light bulb or LED diode, as well as a photodiode (lens with photoelectric receiver). For smaller spaces, a point type detector is sufficient, which illuminates the flowing air in its chamber and can thus detect smoke from a nearby fire on the basis of suddenly scattered light. Alternatively, smoke scatters the light beam after entering the chamber, triggering an alarm. Detectors with optical or projected beams are better suited for larger spaces, such as atriums and auditoriums. The detector emits a beam of infrared or ultraviolet light, which is received either by itself or by a receiving reflector. If the received light beam is weaker due to smoke, the detector will trigger an alarm.

Optical detectors can often be found combined with a heat sensor. Such variant significantly lowers the probability of a false alarm.

Which type to choose?

Each type has its pros and cons and depends on where it will be placed. Ionization detectors are more sensitive to tiny smoke particles from fast-burning fires, optical detectors, on the other hand, detect smoke from a smoldering incipient fire faster, which is especially useful in households where there is a risk of ignition of the wiring or fire in the kitchen during baking and cooking. Ionization detectors located near kitchens and garages more often trigger false alarms, to which they are generally more prone. For optical detectors, there is a risk of blocking the light stream by dust or insect.

According to conducted studies optical detectors respond more rapidly to incipient fires manifested by smoldering than the ionization ones. This is a difference of tens of minutes, which allows for timely evacuation and summoning firefighters.

In the case of rapid fires and invisible smoke particles, ionization smoke detectors are a better option. They are also more suitable for detecting dark to black smoke, while optics better recognize white to gray smoke. A combination of both types of detectors or a combination of an optical detector with a heat sensor could therefore be considered an ideal choice.

Recently, the number of aspirating smoke detectors (ASD) suitable in complex fire protection systems of large buildings has been increasing on the market. It is an advanced and highly sensitive technology that sucks in air in every room thanks to small hoses. Then the air is analyzed and evaluated on the basis of data obtained from all rooms. If the presence of smoke particles is detected in a room, an alarm is triggered. Aspirating detectors are especially suitable in places with increased air flow, due to which optical and ionization detectors might not detect smoke in the early stages of fire. They are also suitable for rooms with a higher potential risk of ignition, such as computer rooms.

Detectors can serve as separate fire detectors or be connected in a fire protection system.

In households, separate detectors are most often used, which also serve as fire detectors and emit a loud sound signal. Some can be interconnected so that a detector that detects an imminent danger in one room can also signal to detectors in other rooms. However, the audible signal is often the only response that these detectors are capable of in the event of a threat. They are either wired or wireless.

Some detectors serve only as sensors and send the collected data to the connected control panel, which analyzes and evaluates them and, in the event of deviations from the normal state, triggering the appropriate warning devices.

What parameters to consider when choosing a detector for your home?

One of the parameters is a number of rooms in your household, and how far apart they are. Then you need to decide whether you only need detectors signalling locally or remotely via remote communication. Autonomous detectors acting only as a siren and a visual alarm are the cheapest option. They warn of the impending danger only in the room where they are installed, which may be sufficient in a small apartment. However, if you are away from your home, you will not be informed about the fire and the situation may not be dealt with fast enough to avoid significant damage to your property.

Several interconnected detectors are definitely a good choice for a family house to ensure that the alarm is audible on all floors and rooms. In such a case, it is no longer necessary to fit the connected alarms with remote communication, which would send a warning about the fire to your mobile and thus allow to prevent major damage to property.

What detectors are auitable for commercial and other objects?

It is certainly more practical to install a complex fire alarm system consisting of detectors, control panel or control panels and signalization in large, but also small, commercial buildings. Detectors for these systems tend to be more expensive than stand-alone battery-powered devices. They can be used in commercial and industrial buildings, hospitals, but also on ships, trains and in some households. The detectors themselves do not have an audible and visual signal, but send the data to the control panel, which, after evaluation, triggers external alert devices. The control panel can secure various degrees of threat and, in addition to external alerts, can control more complex functions, such as evacuation of people and the like.

How are detectors connected to a control panel?

However, today's systems are also able to identify which detector detected the threat. The control panel still monitors individual zones, but in each zone it can accurately identify the detector indicating danger. Each detector in the system receives its own number or address so that it can be immediately identified on the control panel. These systems are usually more expensive to purchase, but they also have other features that older, classic systems lack. These functions include, for example, various time-dependent sensitivity modes, determination of system errors, graphical display of detectors on the control panel and more.

What is the best location for a smoke detector?

The most common location for detectors is a ceiling or wall, where they can best detect naturally rising smoke. It is also good to place the detector directly in the potentially risky rooms (kitchens, workshops, boiler rooms, etc.). But even placement in connecting rooms, such as stairs or hallways, will bring the same result, only theoretically delayed by a few moments. At the same time, the probability of a false alarm is reduced. One recommended room for installing a smoke detector is a bedroom, as a sleeping person cannot smell smoke and react in time. The detector is most often fixed with screws.

Typical way of signaling is an audible and visual alarm in the form of a loud sound and flashing light. Some detectors have the option of dimming or temporary silencing, which is especially useful in cases of false alarms in places where they can occur quite often (eg near kitchens). However, there are also alarm devices with tactile warnings, vibrating pads, flashes or remote headphones, which are designed primarily for at-risk groups of the elderly and deaf, who would not have to wake up during an ordinary alarm. Lower frequency sounds also work better with these groups.

Detectors can be powered by a central alarm system or removable rechargeable batteries. Central alarm systems of large commercial or industrial buildings are powered from the mains by a backup battery, so that even in the event of a power failure, the system does not fail. Cheaper autonomous detectors are often powered by rechargeable or disposable batteries that need to be replaced over time. Some detectors use battery only as a backup source in the event of a power failure. In the event of a weak or discharged battery, the detectors will indicate that it has to be replaced. It is recommended to replace the battery at least once a year.

Should I get a smoke detector for my home?

Definitely yes. While commercial and other buildings have the presence of a central alarm system ordered by the government, for apartments and family houses, especially older ones, it often depends only on the will of the owner. It is stated that the risk of death in a fire halves with the presence of a functional smoke detector. Firefighters also strongly recommend them. Even a cheap autonomous smoke detector can save lives and protect property from damage.

How often do I need to replace the smoke detector?

Its service life is about 8-10 years. Then it is recommended to replace it with a new one. Regular check-ups should also be done. Do not forget to replace the batteries at least once a year.